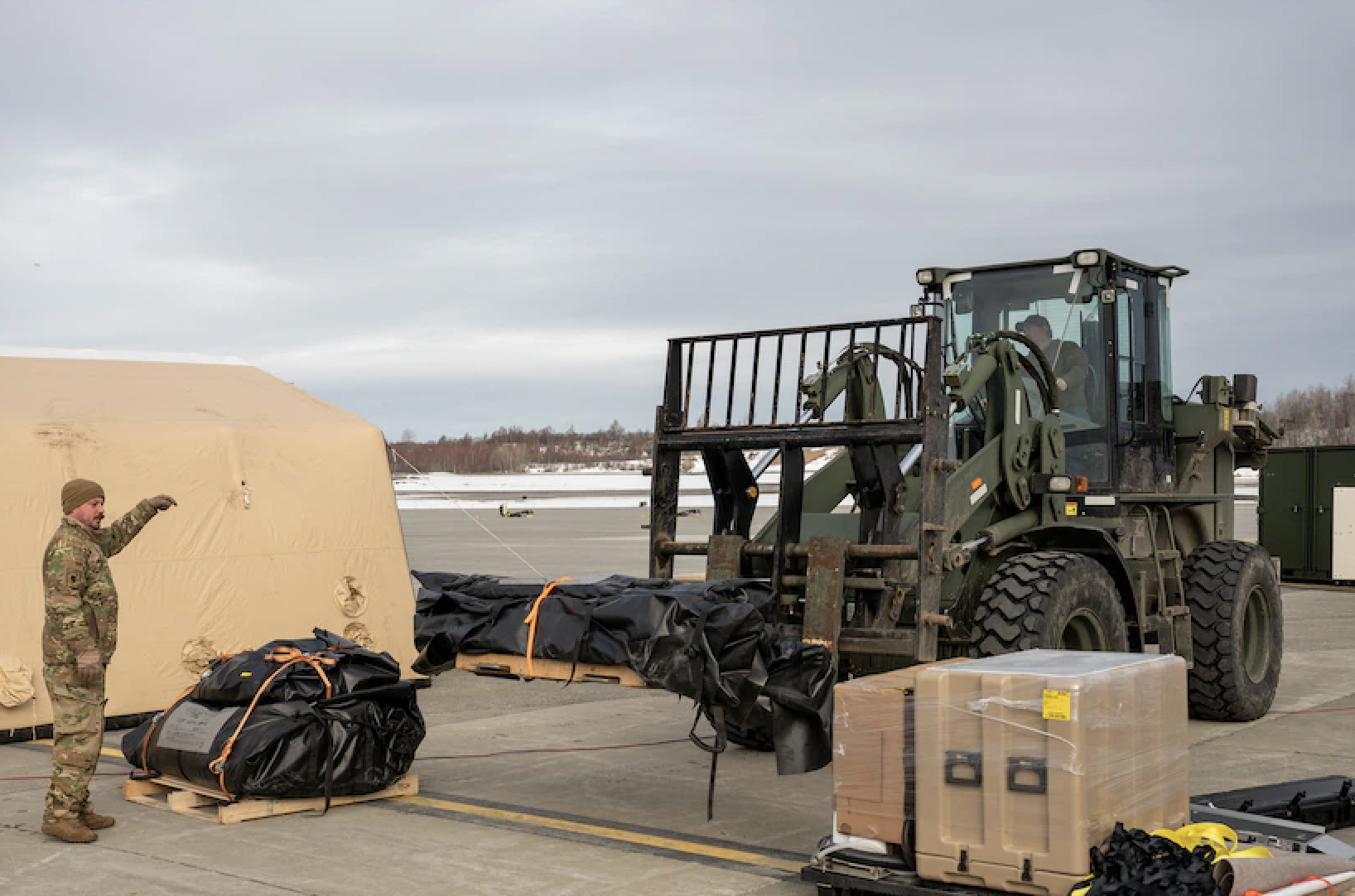 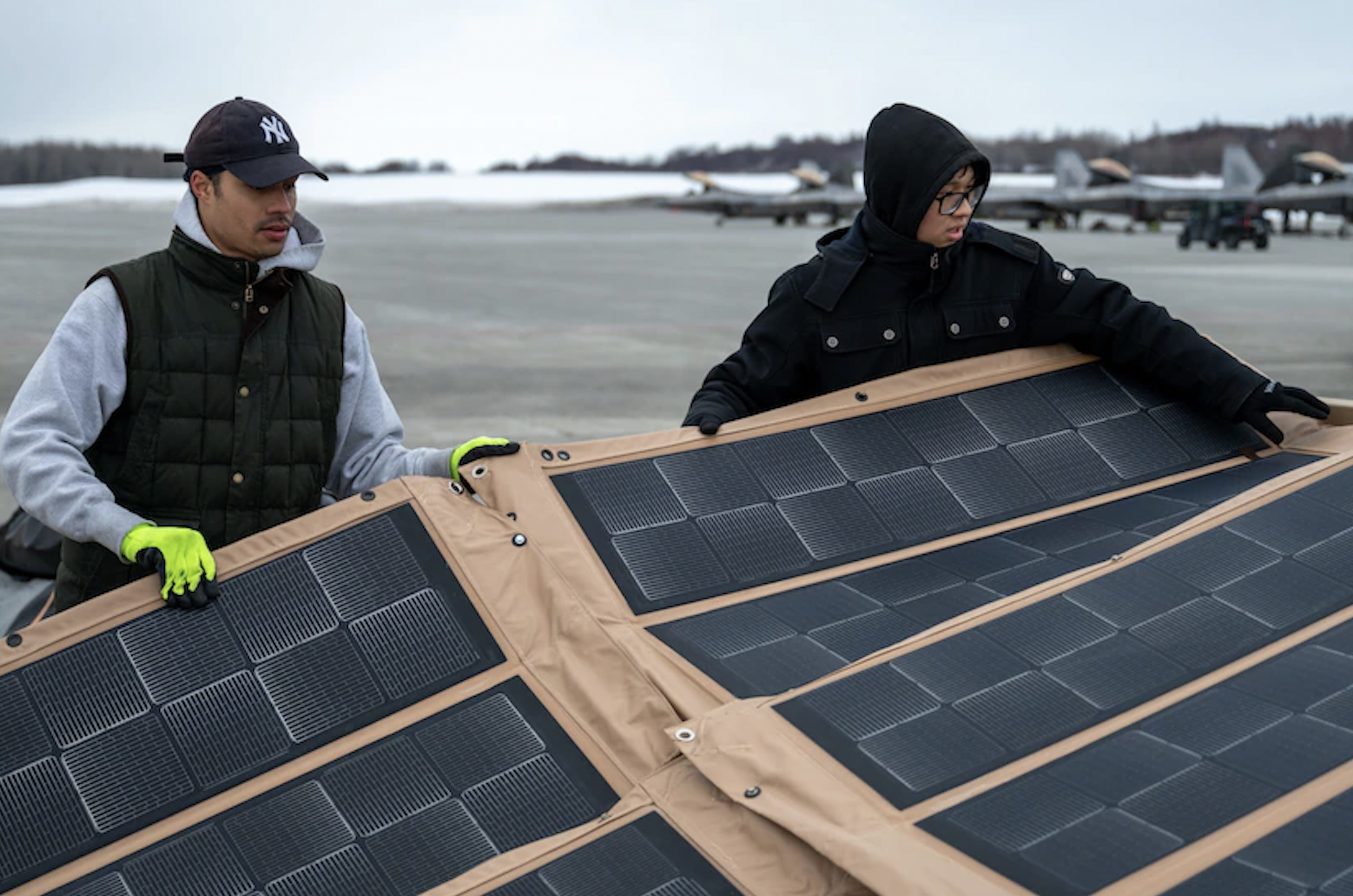 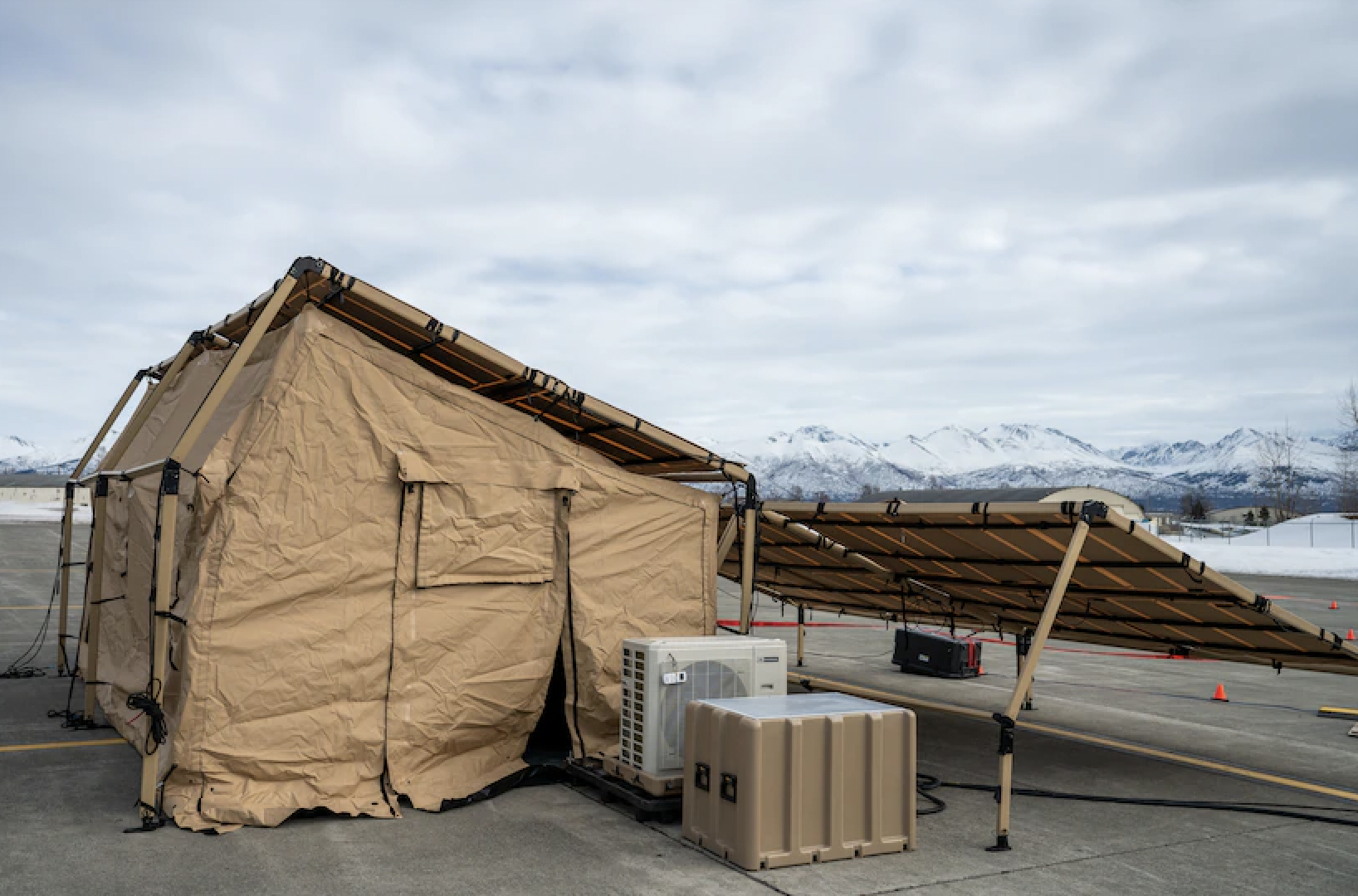 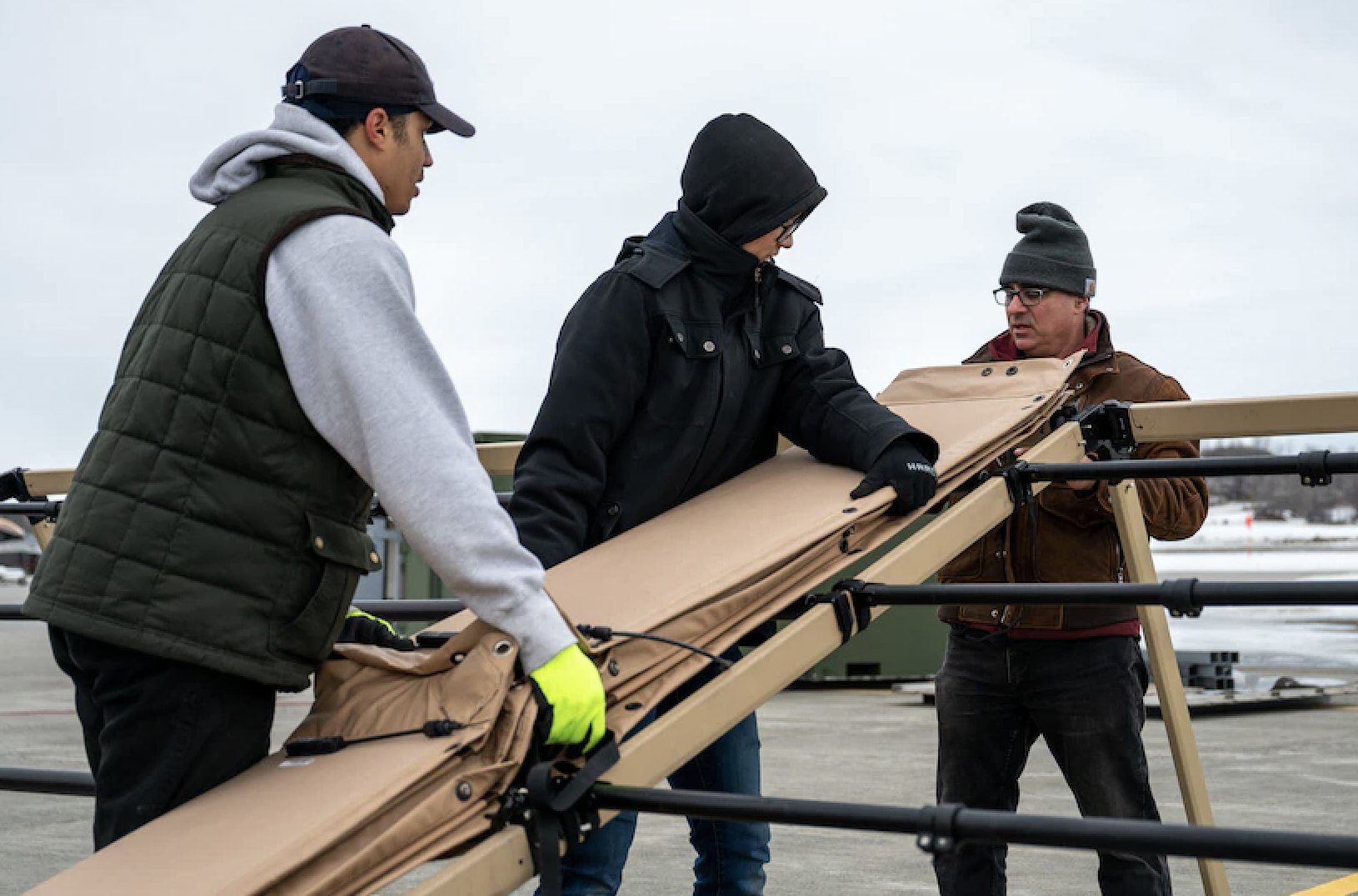 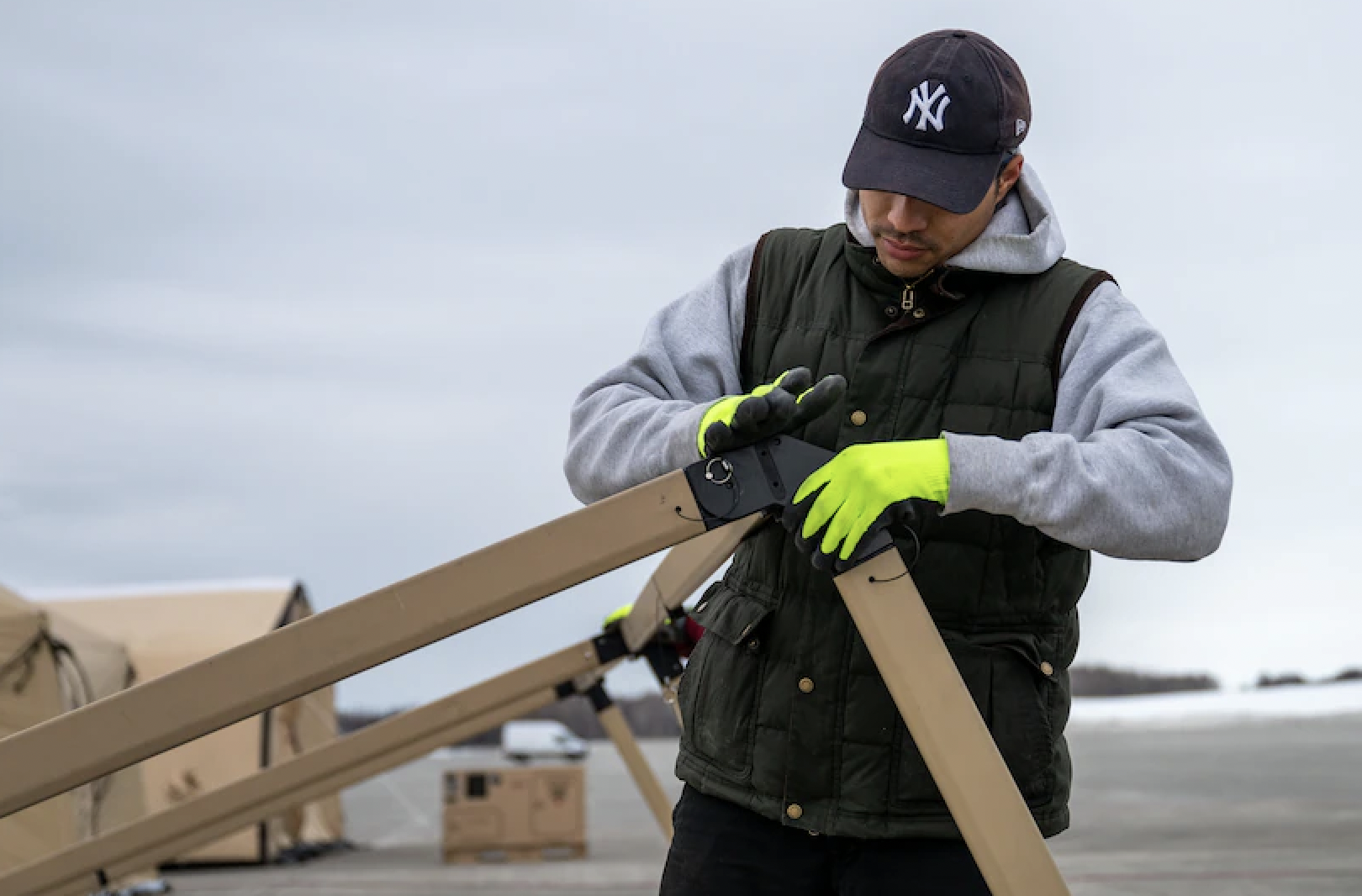 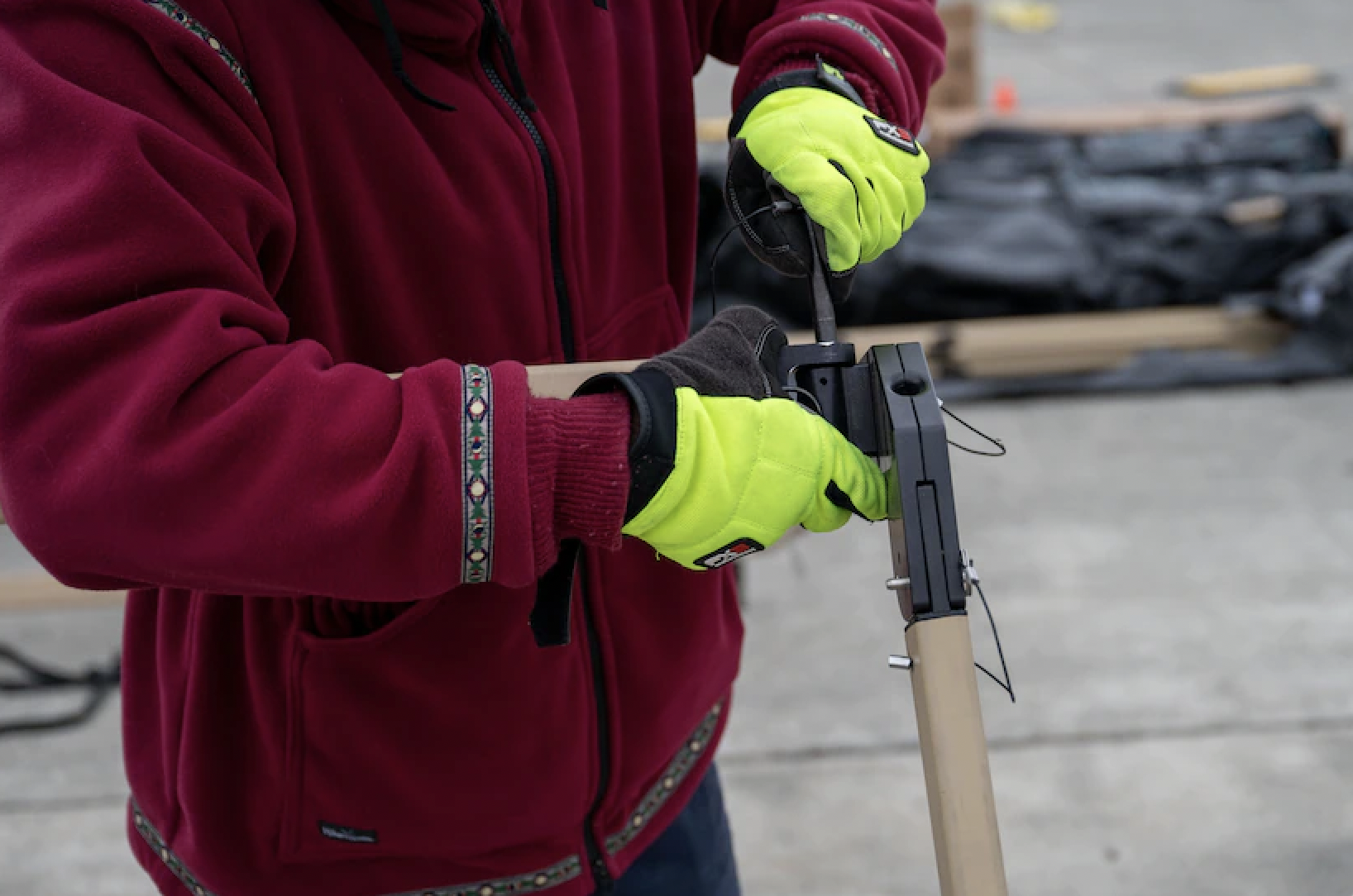 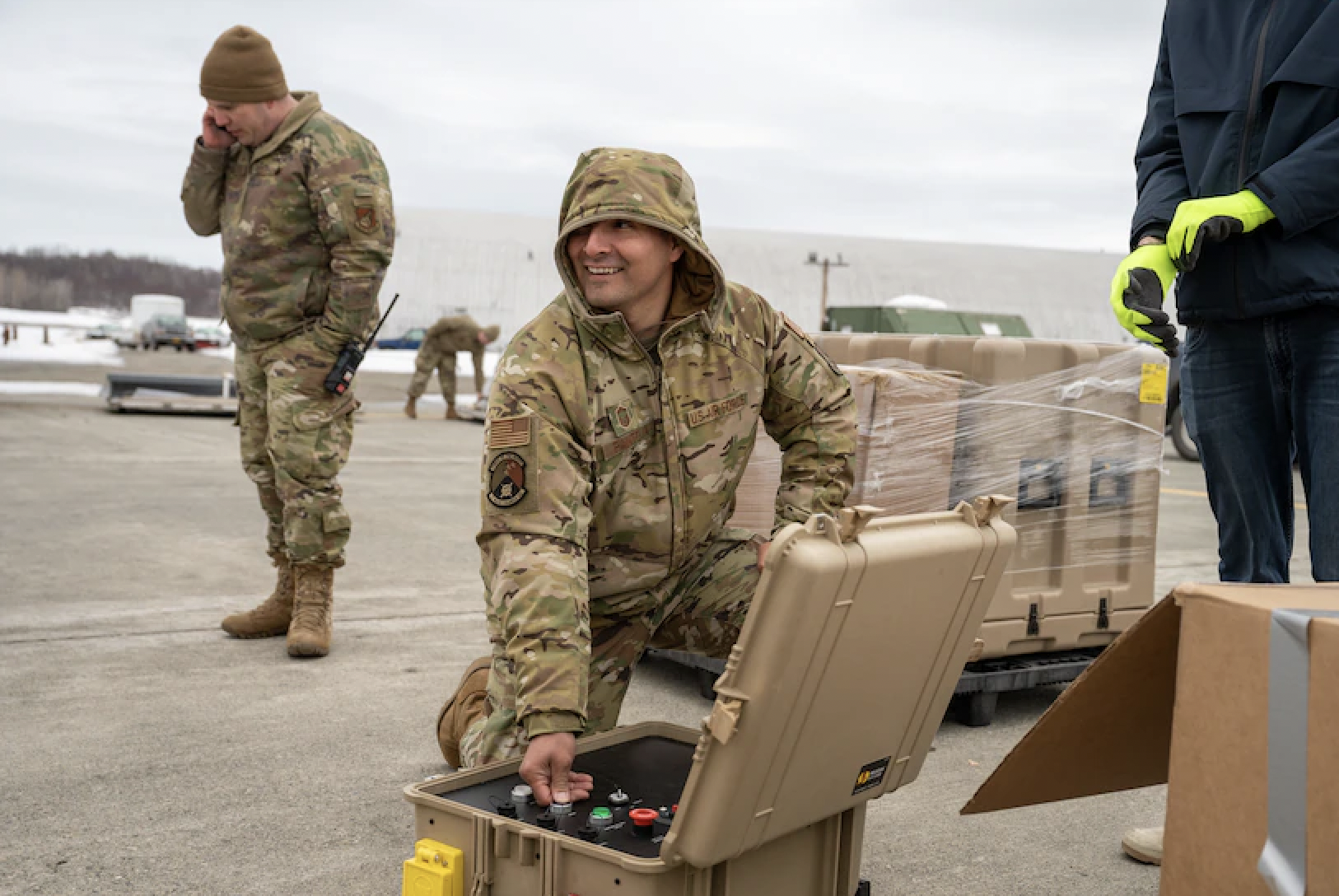 photo courtesy of US Air Force

JOINT BASE ELMENDORF-RICHARDSON, Alaska  –  Logistics can be an extreme challenge for a military. On the top of the list of critical items is fuel, whether it’s for heating, mobility, or powering a pilot’s tablet.

Trucking fuel in a contested area can be difficult and dangerous or flatly impossible, but the sun shines everywhere. Solar power can massively reduce the need for fuel and generators, but can be logistically difficult to deploy in austere environments.

Recently, Air Force Spark Tank and AFWERX awarded contracts for modular pop-up tents and fabric solar panels, which can harvest a serious amount of power – not only enough to heat and light themselves, but to provide power for troops, communications and electronics plus much more.

Pvilion, a company based in Brooklyn, New York, fielded the systems on the Joint Base Elmendorf-Richardson flight line during exercise Polar Force 22-4 on March 31.

Anyone who served in Iraq or Afghanistan remembers the constant roar of generators around the bases there. Pvilion hopes to help make that a thing of the past.

The tents, for example, have a 42-inch by-42 inch footprint when they’re packed up and on a pallet.
Airmen can offload them, plug them into a battery bank, press a button, and almost walk away; in three minutes, the tent has put itself up into a 20 foot by 20 foot shelter with windows and doors, 11 feet tall.

The tent will also take itself down at the push of a button, ready to be re-palletized.

The Hands-off Expeditionary Tent System, or HEXT, answers the needs of Agile Combat Employment – being able to drop Airmen wherever they need to go, with modular support.

To go with the tents, Pvilion also developed the fabric-based solar panels, the SPIS or Solar Powered Integrated Structure, which can be on or secondary to a tent. They can be mounted on the same modular frames as the tents, or simply draped over a vehicle or spread on the ground. The panels power rugged battery packs that almost snap together – a modular system. The first Airmen arriving at the location can bring one or two batteries, with follow-on troops bringing more as needed. When the mission’s over, the majority can be taken out, leaving only one or two for the last bits of power needed.

Additionally, the systems are scalable and parts are interchangeable, Touhey said.

“The tents get longer legs; the solar racks get shorter ones, but it’s all the same stuff,” he explained. Adaptability makes the systems ideal for ACE, contingency response, combat control, and recovery operations, where personnel numbers may vary considerably.

The hybrid batteries can also be powered by a generator if there’s not enough sun, but even on a cloudy day at JBER, they were harvesting thousands of watts. The 5-kilowatt integrated generator and batteries also “talk” to each other – the command center, also in a ruggedized brick, constantly communicates to the power situation, and will turn on a generator if necessary. When the sun comes back, it will shut down the generator and return to solar power.

Pvilion is testing and evaluating the performance of the systems at JBER, Spangdahlem Air Base, Germany; Robins Air Force Base, Georgia; Cannon Air Force Base, New Mexico; Joint Base McGuire-Dix-Lakehurst, New Jersey; and at Space Force bases in Colorado.

The systems were originally designed for civilian use, and are being fielded after two years of ruggedizing – meeting the Air Force’s requirements for snow loads and wind. They can withstand 65 mph wind and up to a few feet of snow. Since the panels are fabric-based, snow can easily be shaken off them.

“It shows the innovation capabilities between small businesses and Airmen users,” Touhey said. “We are getting real-life feedback by deploying seven kits to different climates, different uses, [and] different requirements. But it’s all using the same blocks.”

The systems are so far getting kudos from Airmen used to spending time on the chilly flight line.

“This time, the Airmen had two tents out there,” said Senior Master Sgt. Rich Pantoja, the 3rd Maintenance Squadron Accessories and Propulsion flight chief. “There typically is just one, but now the pilots can do their debriefings and get dressed without all the other personnel needing to leave.”

The Pvilion project started as a contract with the Air Force’s Rapid Sustainment Office in late 2019. They went from ideas on paper to fielding prototypes in nine months, Touhey said.
“It’s a testament to RSO and their contracts,” he added. “Contracting is rolling with us having a 90% solution, then a 95% solution, then a 98% solution, and so on.”

The systems were taken down at the end of Polar Force, but are now the property of U.S. Pacific Air Forces, Touhey said, and are available to any unit needing them.

“If anyone wants to kick the tires, they can,” he said.

Get the latest product and industry news

Get the latest product and industry news